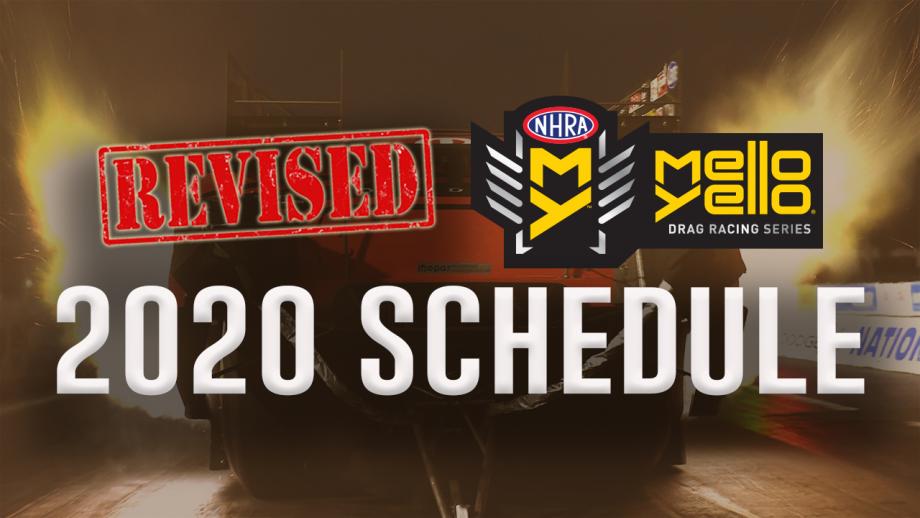 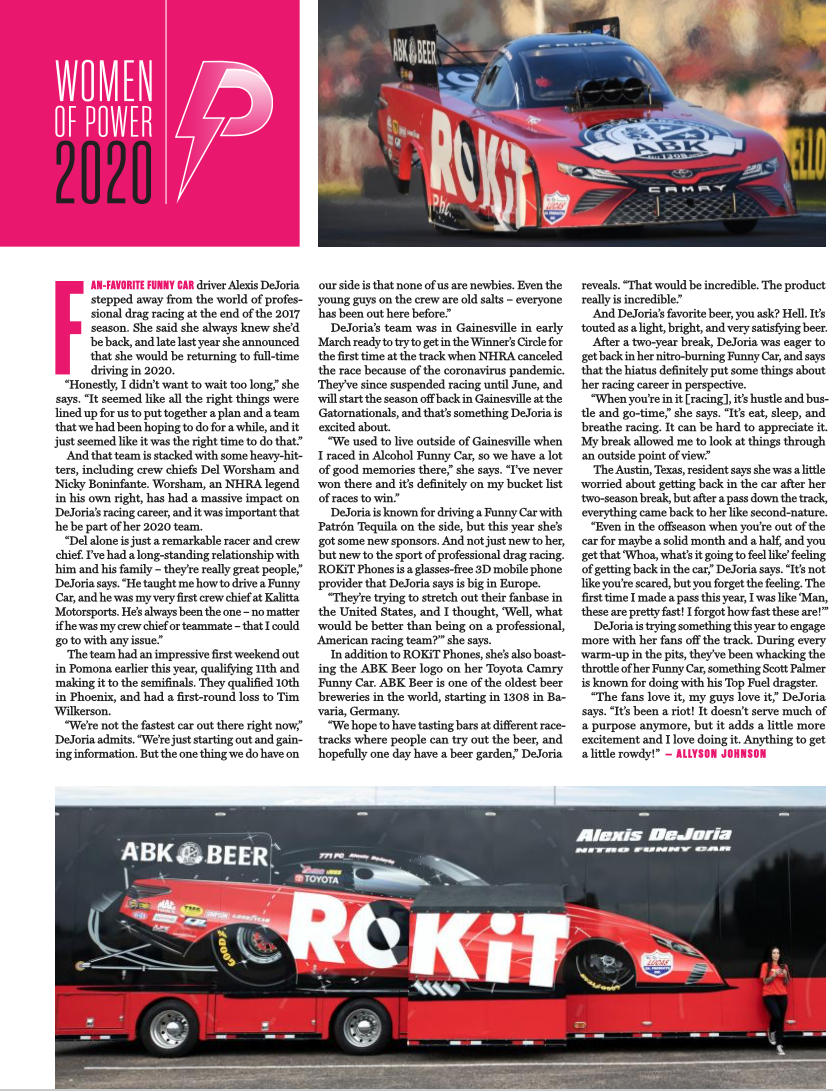 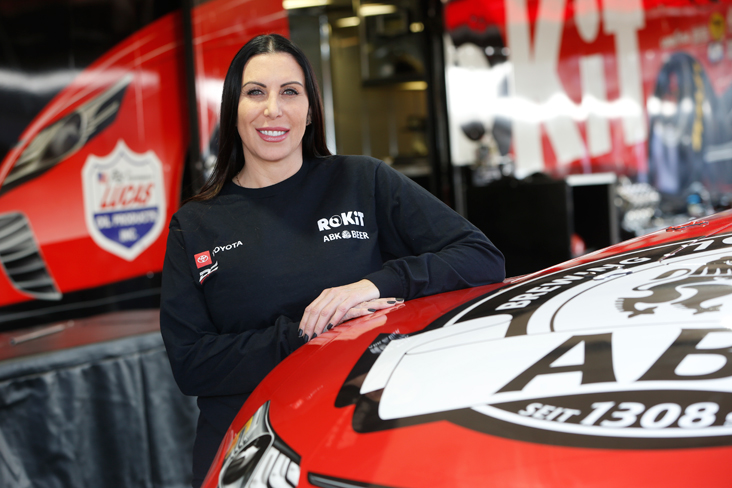 The way that Alexis DeJoria looked at me, you would have thought that I’d asked her if maybe crew chief Del Worsham was going to run the big tires on the front of her new ROKiT Phones/ABK Beer Toyota.

It was one of those softball, warm-up questions you ask to get the party started, the way a crew chief might warm up the first engine of the year after the off-season. After all, it had been more than two years since she’d driven a flame-throwing 11,000-hp Funny Car.

“So, did you ask Del to take it easy on you the first couple of runs, maybe a little softer tune-up?”

“Oh, God no,” she said good-naturedly, laughing. “I don’t have any training wheels on. I want everything he has got.”

DeJoria was in her trailer lounge at the Lucas Oil NHRA Winternationals presented by ProtectTheHarvest.com, the first official event of her comeback season, signing hero cards by the dozen for the ROKiT employees on hand who’d driven over from the company’s Santa Monica, Calif., headquarters to see the debut of “their” car. Her father and No. 1 fan, entrepreneur and philanthropist John Paul DeJoria, was part of the autograph process, waving around each of the photos to air-dry her stylish signature.

Truth be told, DeJoria entered the Winternationals with more laps under her belt than any other driver since last year’s season finale, testing in Bakersfield in November, in Tucson, Ariz., in mid/late January, and then taking part in the annual Pro test session in Las Vegas the week before the Winternationals.

“Obviously, the first run in the car was, ‘Oh man, this is loud and fast,’ but I already feel very comfortable in the car. Del and Nicky [Boninfante, co-crew chief] have made this really easy. Almost from the start, it didn’t feel like I’d been gone two years. I was more worried about the warm-up — stressing out and hoping that I remembered the procedures — than the actual runs.”

NHRA statement concerning suspension of racing due to coronavirus pandemic

At this time, we are suspending all NHRA drag racing for 30 days in response to the coronavirus pandemic.

This suspension includes events at all NHRA-owned tracks and any NHRA-sanctioned events such as the NHRA Mello Yello Drag Racing Series and the Lucas Oil Drag Racing Series. We intend at this time to resume the original schedule on April 17-19 in Houston, and continue thereafter, subject to developments in the interim. The spring Las Vegas event is postponed with new dates TBD. Please go to LVMS.com for information if you have purchased tickets for the postponed event.

We will continue to monitor the situation closely, to listen to experts, and to be transparent as to when we believe we will be able to resume racing.

We made this decision with heavy hearts as we see the effects this pandemic is having on the world, the country and our NHRA family. We believe this is the right decision since social distancing and reducing gatherings of people has been recommended as one of the most effective ways to protect everyone in the long run.

We are all in this complicated, uncertain and rapidly changing situation together, and we encourage everyone to look out for each other. Please take care of yourself and your loved ones. We encourage you to consult www.cdc.gov/coronavirus/2019-nCoV/index.html for information and updates.

We look forward to the time when we all come together again in person to celebrate the most extreme sport on the planet. Though we will have to be physically apart we encourage you to stay connected with the community through NHRA.com, and all of our social channels, on Facebook, YouTube, Instagram, and Twitter. NHRA.TV and National DRAGSTER will continue to deliver drag racing content for you. 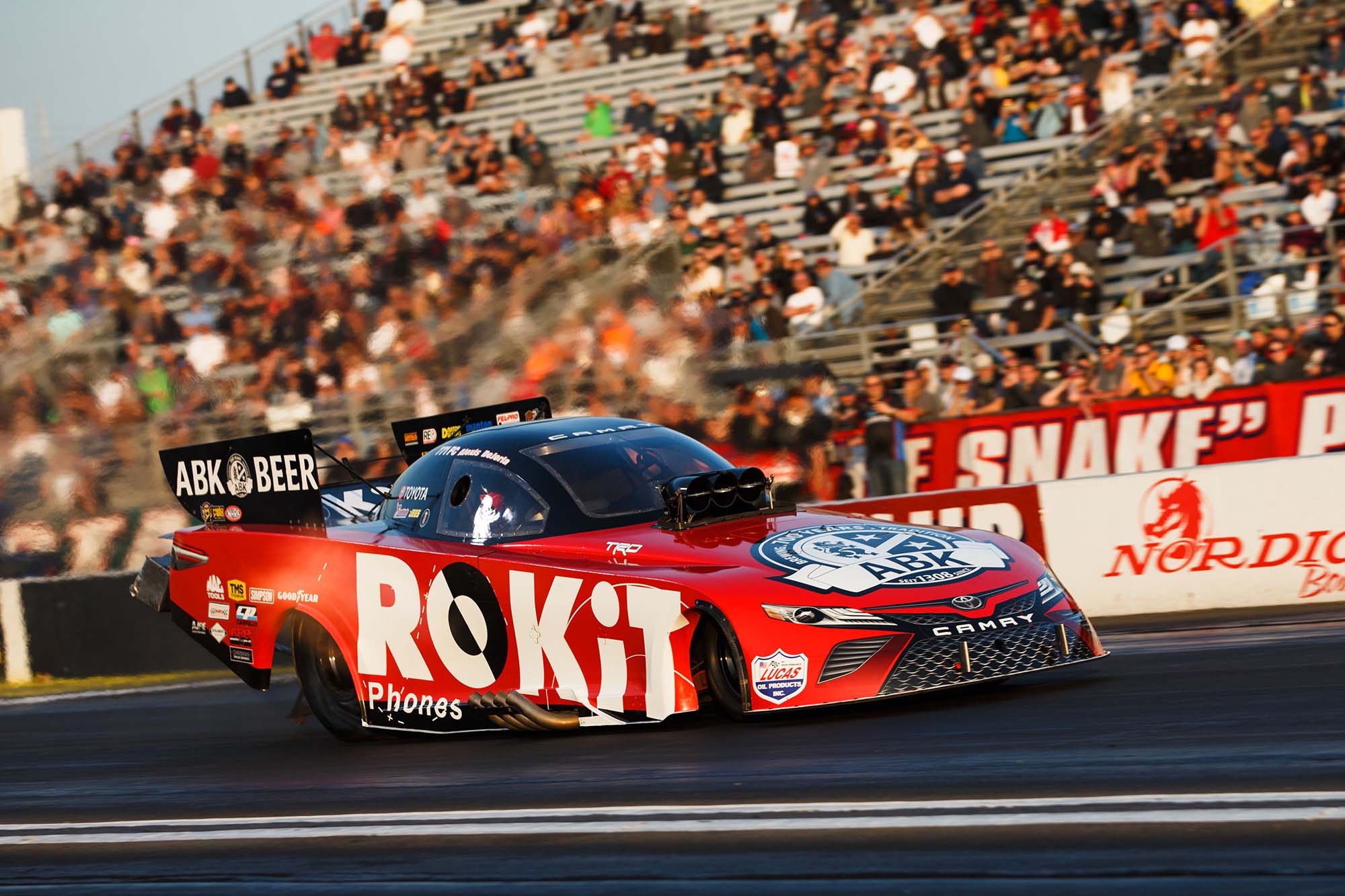 The Racing Times - With the Arizona Nationals by the wayside and Gainsville next on the schedule, we spent five minutes minutes with Funny Car driver Alexis Dejoria. Alexis is making her return to the full Mello Yellow Drag Racing schedule after a year off. Let’s see what Alexis has to say on her return…

How did it go about for you to return to racing and how did you go about getting back together with Del?

(Alexis) I always planned on coming back. Talked about it frequently with Del and Nicky. The timing was right for us all.

After being away two years from the sport, how did it feel to get back into a Funny Car? And how did you feel after your first run during Spring training?

(Alexis) Lots of sleepless night getting excited to drive again. There really wasn’t much to get used to again but the speeds. Other than that my first runs went very well and I felt right at home like I never left.

Has anything changed in the last two years from a driver perspective?

(Alexis) The NHRA has tried to slow the Nitro cars down. Slight changes that keep the cars from going 340mph which they don’t want us doing.

Beinga driver, reaction time is key, how are you feeling about where you’re at right now?

(Alexis) Surprisingly enough my RT’s have been good for not driving for 2 years. I can always improve.

Can you tell us more about your new sponsors ABK Beer and ROKiT Phones? Anything special we can expect from them this season?

(Alexis) Yes our new sponsors are getting involved with fan interactions at the track. You will be able to sample

Any track you’re looking forward to returning to?

(Alexis) All of them really but my favorites are Vegas, Bristol, and new on the list Virginia.

How has the fan base responded to you coming back?

(Alexis) The fans and teams have been very supportive and excited to have me back out there. Mixing it up in the FC class and adding some color to the tv coverage lol!