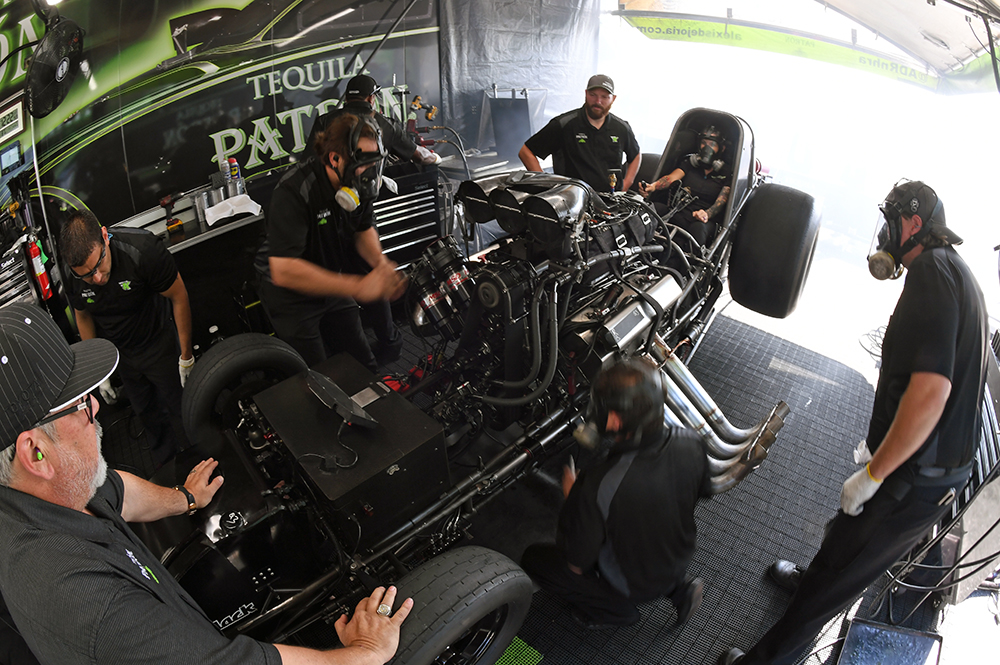 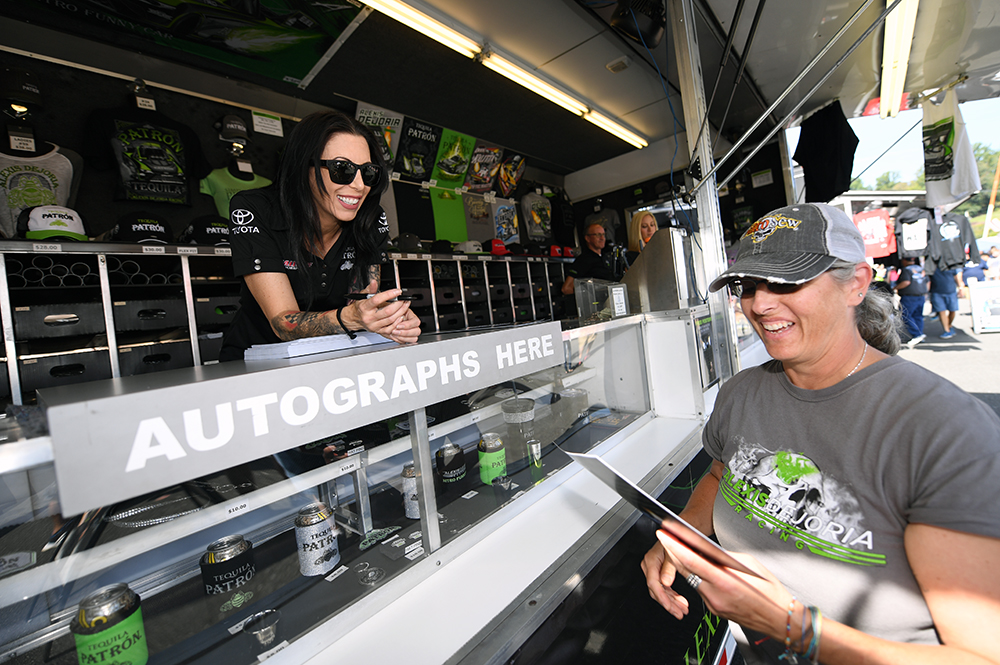 The Competition:
No. 6 Alexis DeJoria (Lane Choice) vs No. 11 Tommy Johnson Jr.

Quotables:
Alexis DeJoria, Driver
We made good, consistent runs in qualifying and tomorrow's looking good. They're forecasting hot weather, which is just how we like it. We have a good tune-up for those kind of conditions. We're going to race as hard as we can, go as many rounds as we can, and hopefully pick up a birthday Wally. 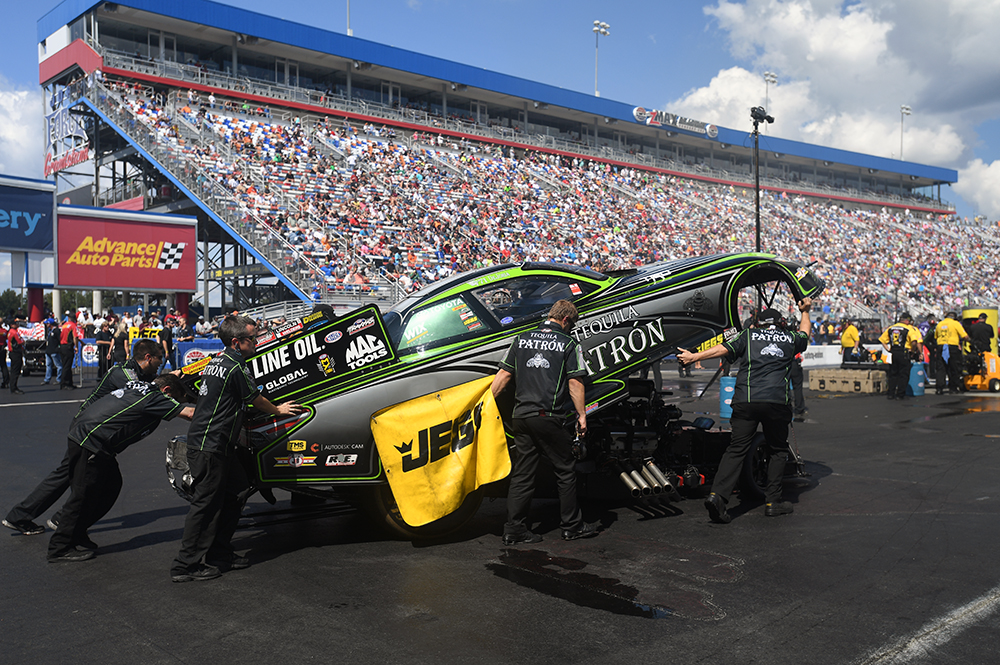 Alexis DeJoria and the Tequila Patrón Toyota Camry Funny Car team had one of the strongest performing cars at zMAX Dragway throughout the NHRA Carolina Nationals.

Three out of DeJoria’s four qualifying passes were ‘Top Three’ runs, earning her a qualifying spot in the top half of the field going into race day.

Second round found DeJoria squaring off against Jim Campbell and once again, DeJoria’s crew chiefs Nicky Boninfante and Tommy DeLago were ready with the hot track tune-up. Unfortunately for Campbell, the race was over before it even started when he jumped the gun and set off the red light.

In the semifinal round, DeJoria drew Courtney Force. Both women made solid runs, but Force’s 3.957-sec pass edged out DeJoria’s 3.976, ending Team Patrón’s day at the semis.

DeJoria and her team leave zMAX Dragway with the bragging rights of being the only Funny Car team to run in the three-second zone all weekend. They look to carry the momentum into the NHRA Nationals in Reading, Penn., kicking off in five days.

We’ve got to be proud about our semifinal finish today. We were up against Courtney Force and she beat us, but we would’ve beat any other team that ran in the semis; it’s just the luck of the draw.

We made seven full runs this weekend, all in the three’s [seconds], and we’re the only team out here to do so. We did a great job and we’re excited about Reading. 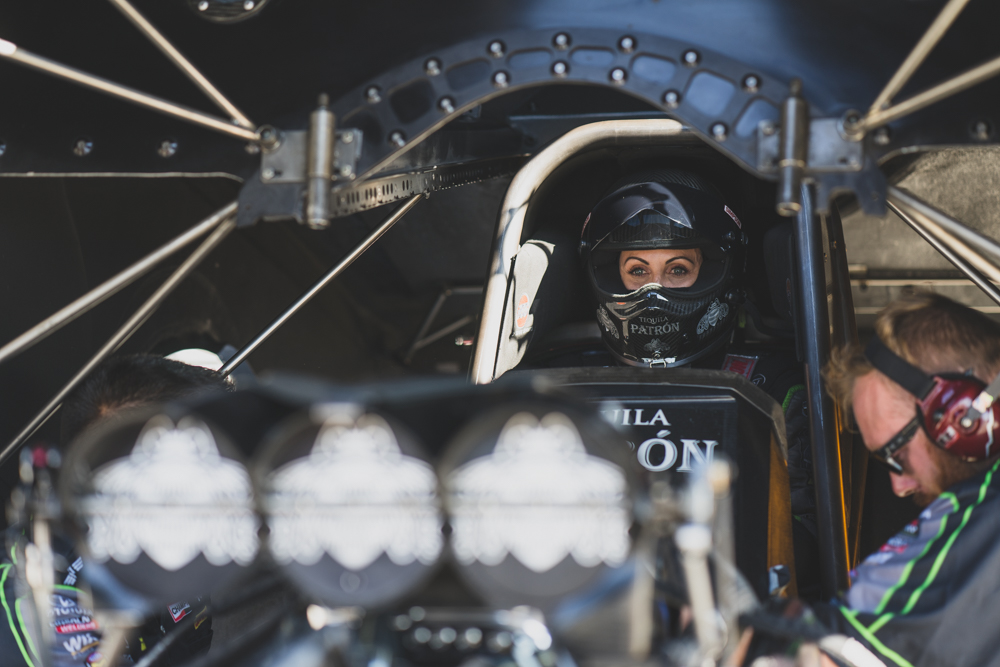 No. 5 Alexis DeJoria (Lane Choice) vs No. 12 Jonnie Lindberg

Alexis DeJoria, Driver
We made four good qualifying passes this weekend; straight down the track, all in the three's [seconds] and we got five bonus points out of it. We are ready for tomorrow. I've got a really good feeling. We have a great team and we're ready to do some damage. 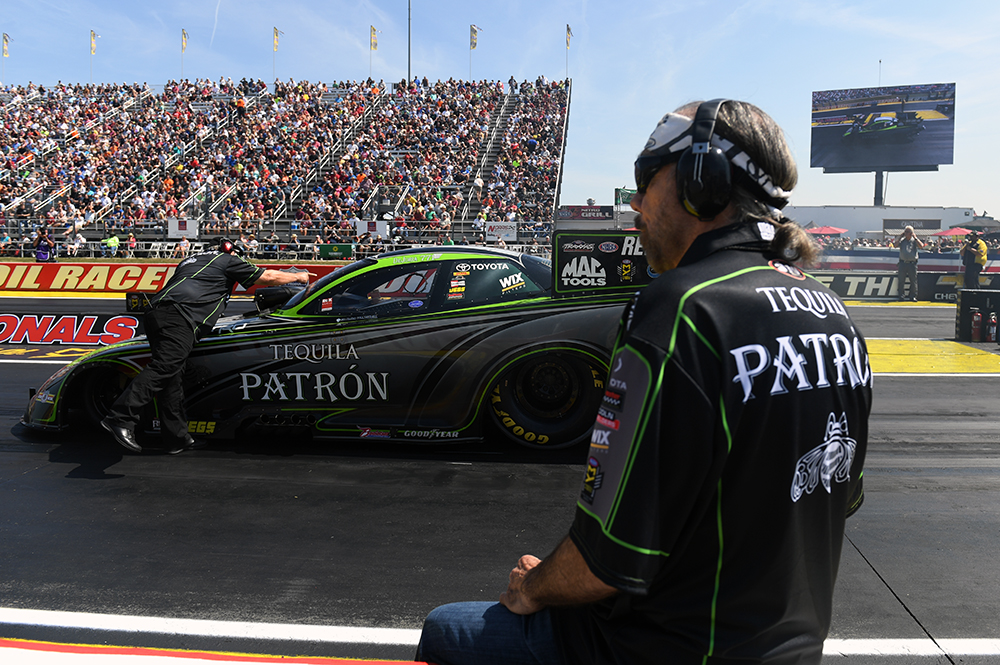 While they successfully maintained their 10th ranked position in NHRA’s Countdown to the Championship going into race day, a mere 15 points separated DeJoria and 11th ranked Countdown hopeful Cruz Pedregon. The 12th - 14th ranked drivers, although less of a threat, also had an outside chance of bumping DeJoria out. Securing the coveted 10th spot and having an opportunity to race for the 2017 NHRA Funny Car championship would come down to Monday’s elimination rounds.

DeJoria and her Patrón team were the final pair to run in the opening round of eliminations. While they waited for their matchup with Ron Capps, Team Patrón watched as three out of the four Countdown aspirants hungry for that final tenth spot, including Pedregon, defeated their opponents.

With Pedregon’s round win, he moved up to the No. 10 spot and bumped DeJoria back to 11th. Team Patrón’s matchup with Capps was now a must-win round in order for DeJoria to still have a shot at qualifying for the Countdown.

DeJoria powered her Patrón Camry down the Indianapolis strip in 3.901-seconds at 331.94-mph. Despite having the fourth best run of the round, it wasn’t enough to stave off Capps’ 3.880, and Team Patrón would not advance to round two. The loss also meant DeJoria and the Patrón team would not qualify for the 2017 NHRA Countdown to the Championship. While they will not chase a Championship this year, DeJoria and Team Patrón look forward to playing spoiler, and more round wins before the conclusion of the season.

Quotable:
Alexis DeJoria, Driver
What an intense race this has been. We have a very consistent race car, we just didn’t have what it took to win that first round this morning. I did my best and my team did their best, but unfortunately we weren’t able to qualify for the Countdown this year.

Considering everything we’ve been through this season, the fact that we were even a Top 10 contender is huge, but to say I’m upset right now is an understatement. My heart’s broken for myself, but mainly for my team. They’re my rock. They work so hard and have been through so much.

I want to thank everybody involved- all of our sponsors, and all of the guys on the team for kicking ass and doing a great job all weekend. I couldn’t ask for a better team.

We won a race in Brainerd and the year is not over yet. Tommy [DeLago] and Nicky [Boninfante] have got our Patrón Camry right where it needs to be. We’re just getting better and better, and more consistent with every race. Hopefully we will win some more races before the year’s over and be a good blocker for my teammate, J.R. Todd.