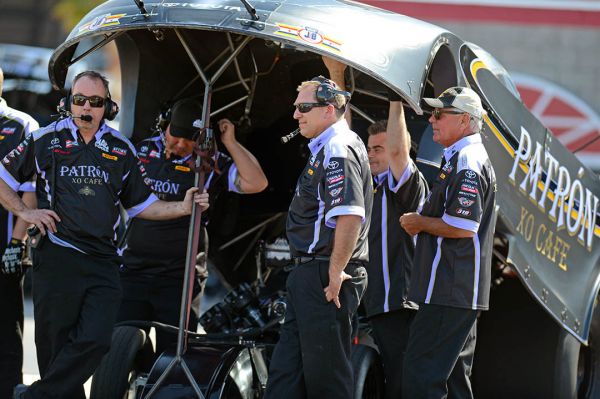 This last year made a huge difference on our Toyota Camry. As I mentioned before in my last blog, our first two years were a struggle. As with any new team, building a competitive, winning operation takes time -- finding the right people, clutch set up, and so on.

All this hard work has finally paid off, and I am proud to say we have just won our second race in just four races this season. Two out of four is pretty good for a team that only made it to one final and a handful of semifinal rounds in two and a half years on the pro circuit -- not to mention running a career best and female world record with a 3.997-second run in our season opener at the Auto Club raceway in Pomona, Calif.

Our crew chiefs, Tommy DeLago and Glen Huszar, joined the team at the beginning of last year. We had a good year with Del Worsham at the helm in 2012, but there was a shift in the Kalitta Motorsports camp and Del was asked to drive the DHL Funny Car. Full Story 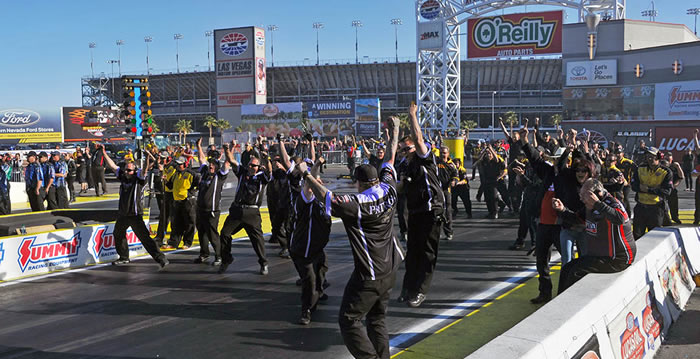 LAS VEGAS, Nev. (March 30, 2014)— Four races into the 2014 NHRA Mello Yello Drag Racing Series, and driver Alexis DeJoria has already claimed half of the Funny Car titles. She picked up the second win of her Funny Car career at the 15th annual SummitRacing.com NHRA Nationals at the famed Strip at Las Vegas Motor Speedway on Sunday afternoon.

Throughout qualifying, the Patrón XO Cafe Toyota Camry made clean and consistent passes, but opted to be conservative, placing them in the No. 12 spot in the competitive 16-car Funny Car field. They came out strong Sunday morning with a 4.071-second at 305.08-mph pass- at the time, their best run of the weekend, and low ET of the session. Ultimately, their best run of the weekend was in the Finals against Hight, as DeJoria set off the win light with her 4.026-sec run versus Hight’s 4.083. DeJoria and Hight had met previously in the Finals in Phoenix, the second race of the season, with DeJoria coming out on top. She is 4-0 against Hight in competition.

“It was definitely a great day at the office to get the win for the Patrón team here in Vegas where they are headquartered. It was huge,” DeJoria said, while clutching her Wally. “We have been in a few semi-finals but never made it past that point here at this track. Today we focused on taking it one round at a time, and with each round win, I was just hoping and hoping. And then when we just kept going rounds, I kept my head down and tried to stay focused. Tommy [DeLago] and my crew gave me a great car today and it felt amazing for our team to pick up our second win of our career.”

The Patrón team, which struggled to get their footing in their first two years, has had a breakout year in 2014 thus far. In addition to picking up her first two professional wins, DeJoria can also add making history by becoming the first woman ever to make a sub four-second run in the Funny Car class, bragging rights of currently having the most wins of any nitro-class in the 2014 season, and spending the majority of the season so far in the ‘Top 3’ in points standings to her list of 2014 accomplishments. Additionally, by winning the Phoenix race she has already qualified for the prestigious Traxxas Shootout- a race within a race that occurs annually at the U.S. Nationals.

Alexis DeJoria and the Kalitta Motorsports Patrón XO Cafe Toyota Camry Nitro Funny Car team currently sits in the No. 3 spot in the NHRA Funny Car rankings with 299 points. They compete next at the 5th annual NHRA Four-Wide Nationals at zMAX Dragway in Charlotte, N.C., April 11-13. For more information, please visit www.alexisdejoria.com, Follow Us on Twitter @ADR_Nitro771, or Like Us on Facebook Alexis DeJoria.

Alexis DeJoria, daughter of the famed John Paul DeJoria, co-founder of John Paul Mitchell Systems and proud owner of Tequila Patrόn, is a professional NHRA race car driver, competing in the nitro Funny Car class on the Kalitta Motorsports team. Alexis drives the Patrόn XO Cafe-sponsored 2014 Toyota Camry. Alexis, who had all the opportunity in the world to pursue any type of career, felt strongly about following her passion, and her need for adrenaline drove her to pursue the unlikely profession of auto-racing. The determination to ‘blaze her own trail’ continues to drive her and push her to higher levels in male dominated sport of drag racing.

About Kalitta Motorsports
Based in Ypsilanti, Mich., Kalitta Motorsports is a Top Fuel and Funny Car drag racing team in the NHRA (National Hot Rod Association) Mello Yello Drag Racing Series. The team was founded and is owned by drag racing icon Connie “the Bounty Hunter” Kalitta. For more than 50 years, Connie has been involved in the sport as a driver, tuner, and an owner. Kalitta Motorsports is one of the most successful teams in the history of auto racing with five world championships and over 50 national event titles in five different professional drag racing sanctioning bodies since it was established by Connie in 1959. 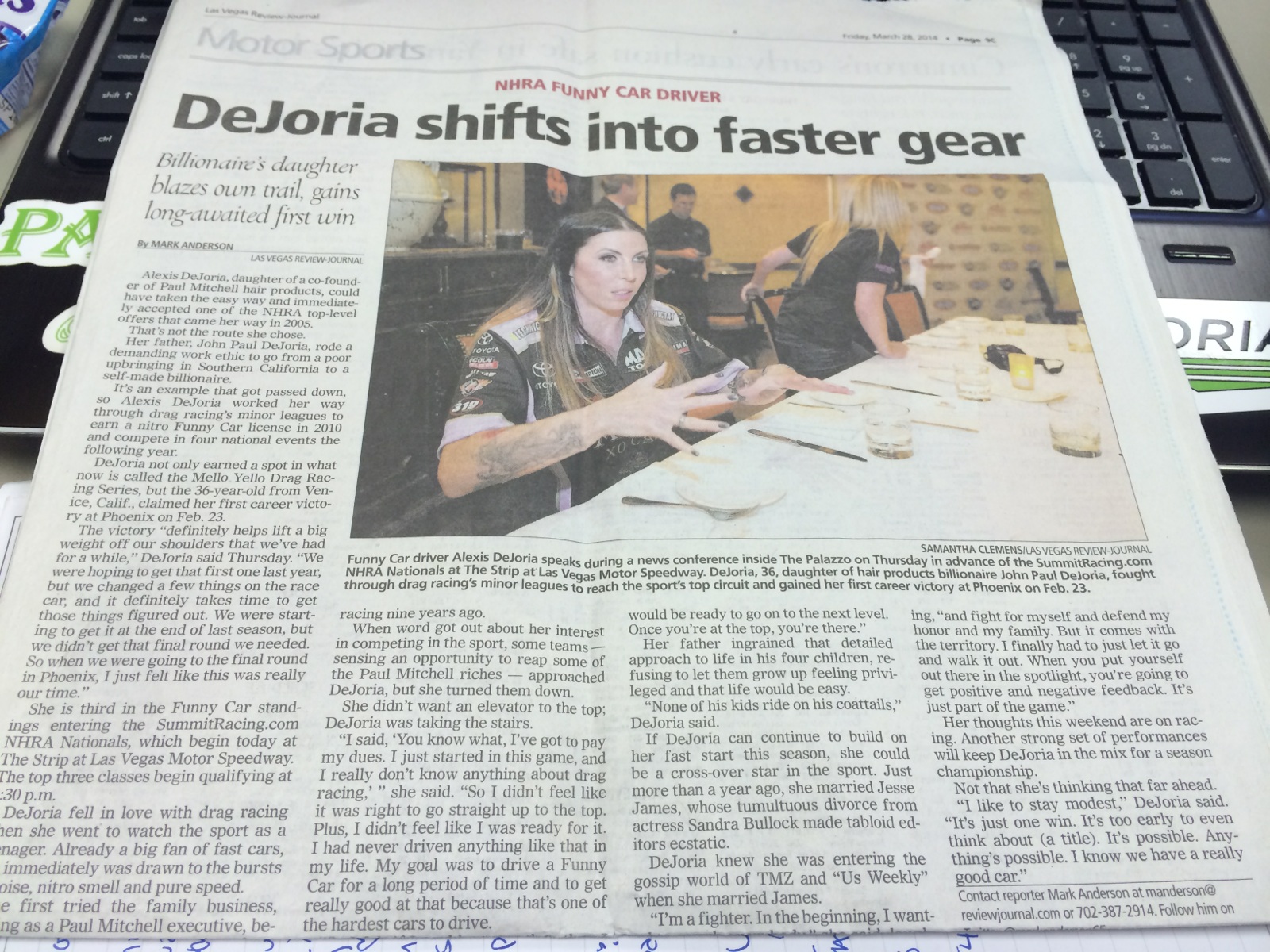 Alexis DeJoria, daughter of a co-founder of Paul Mitchell hair products, could have taken the easy way and immediately accepted one of the NHRA top-level offers that came her way in 2005.

That’s not the route she chose.

Her father, John Paul DeJoria, rode a demanding work ethic to go from a poor upbringing in Southern California to a self-made billionaire.

It’s an example that got passed down, so Alexis DeJoria worked her way through drag racing’s minor leagues to earn a nitro Funny Car license in 2010 and compete in four national events the following year.

DeJoria not only earned a spot in what now is called the Mello Yello Drag Racing Series, but the 36-year-old from Venice, Calif., claimed her first career victory at Phoenix on Feb. 23.

The victory “definitely helps lift a big weight off our shoulders that we’ve had for a while,” DeJoria said Thursday. “We were hoping to get that first one last year, but we changed a few things on the race car, and it definitely takes time to get those things figured out. We were starting to get it at the end of last season, but we didn’t get that final round we needed. So when we were going to the final round in Phoenix, I just felt like this was really our time.” Read More 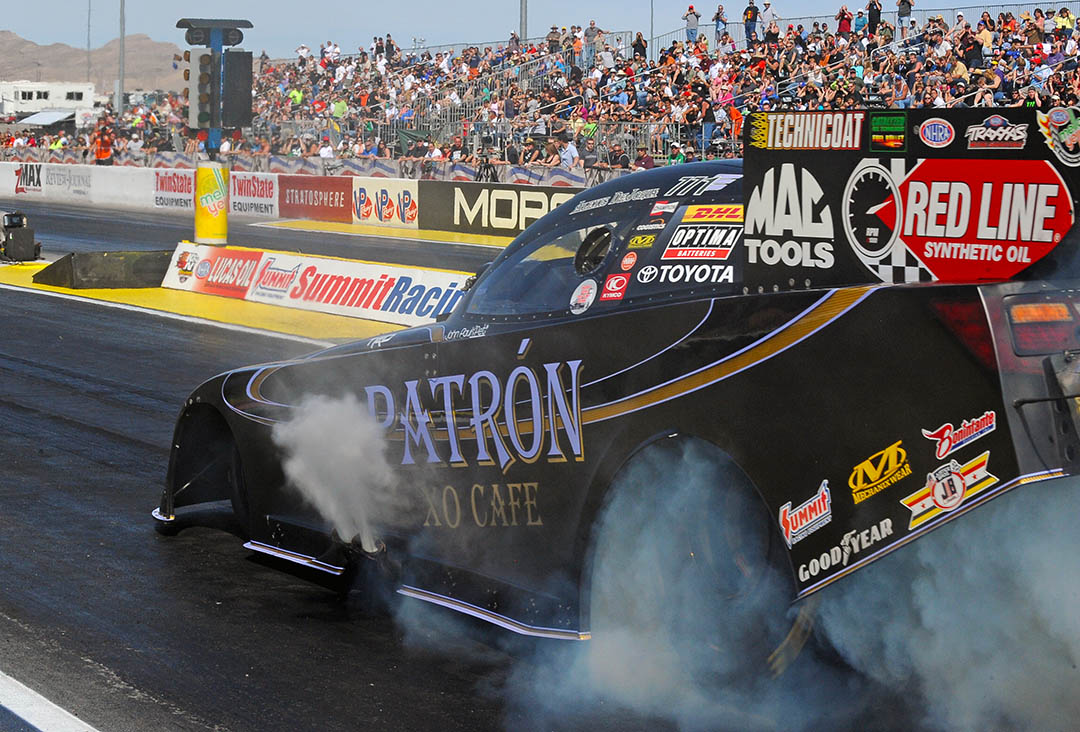 Overall we had a pretty good qualifying weekend. We made it down the track every time except that last run in Q4. We were trying to go for No. 1 qualifier during that session. The conditions were really good and we knew we were safely qualified, so we were trying to really push it. Unfortunately, we just didn’t make it down there, and after it was all said and done, ended up in the No. 12 spot on the ladder.

Although we didn’t qualify in the top half of the field, we had consistent runs during the first three sessions, and that’s key; consistency is what most likely will win races on Sunday. As long as you’re qualified, that’s all that matters. The last two times we were out here in Vegas we went to the semis, and we’re looking to go at least that far again tomorrow.

DeJoria Looks to Vegas to Continue with Top Three Ranking

“We started off strong at the first two races of the season,” DeJoria said, referring to the 24-race 2014 NHRA Mello Yello Drag Racing Series. “Gainesville we had a bit of a hiccup, but we’re very early into the year. There are plenty of races left and we can come back strong for Vegas. This track has typically been good for us. At this race last year we went to the semis, and we’re hoping to go at least that far again on Sunday. Our goal this weekend is to be consistent, qualify well, and go rounds on raceday. We want to continue to put points between us and the rest of the teams so it’s important that we’re successful on Sunday in order to continue to be ranked highly.”