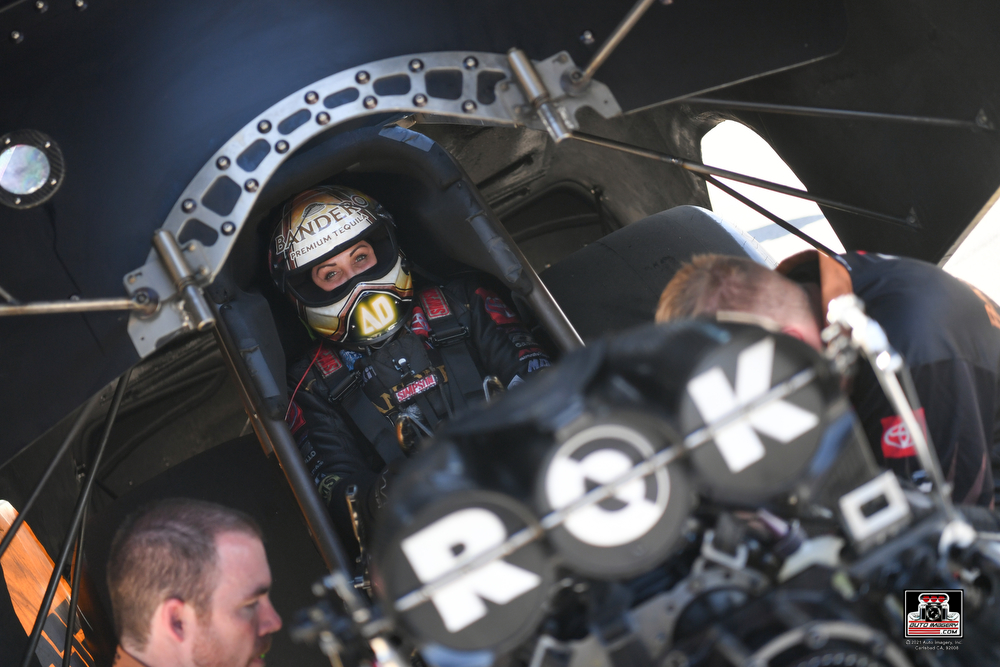 DENVER (July 18, 2021) --- Alexis DeJoria’s Bandero Premium Tequila ROKiT Toyota Camry took a calculated risk to test at Bandimere Speedway immediately following her semifinal performance at the NHRA Norwalk Nationals. The extra effort paid off today for the five-time Funny Car national event winner as DeJoria raced to her first final round of the season and ninth of her career at the NHRA Mile-High Nationals outside of Denver.

The team had an excellent qualifying effort heading into race day as the No. 2 qualified Funny Car and made the most of race day turning on three win lights against Jack Wyatt, Funny Car point leader Bob Tasca III and veteran Tim Wilkerson. In a tough final round match-up with Matt Hagan, the No. 1 qualifier, DeJoria was not able to get the win but will leave the start of the historic Western Swing with momentum and confidence as the tour heads to Sonoma, California, next weekend.

After more than a decade of attempts to conquer ‘thunder mountain,’ defending NHRA Camping World Series Funny Car world champion Matt Hagan finally hoisted the Wally trophy at Bandimere Speedway on Sunday. Starting from the pole for the second time this season and 42nd time of his career, Hagan powered his Mopar Dodge Charger SRT Hellcat Redeye through eliminations to break through for his first coveted victory at the picturesque Morrison, Colo. venue which sits a mile above sea level. The triumph was his first of the 2021 season, the 37th of his career, and national event win No. 360 for Don Schumacher Racing, the winningest team in NHRA history.

“Man, I tell you, this mountain has chewed me up and spit me out several years in a row, and I’m just so glad to pull that win down for Dodge and SRT, and to do it behind the wheel of the Dodge//SRT Hellcat Funny Car in front of so many passionate Dodge and Mopar fans,” said Hagan whose last win came at the 2020 season-finale, the Dodge NHRA Finals presented by Pennzoil in Las Vegas, where he secured his third NHRA Funny Car series title.

“We finally got it done, and I finally get to put this trophy up on the shelf,” added Hagan, acknowledging the unique conditions and challenges and that come with racing in the mile-high Denver altitude during the heat of the summer. “I’ve got to call out my guys and give them so much love. Dickie Venables, Mike Knudsen, Alex Conaway, the whole group, man. To watch them up here in the altitude wrenching and sweating. These guys love doing what they do, and they bust their ass for me. My heart was beating out of my chest up there during the finals and it felt like I was running for a championship. I had to remind myself to calm down, take a deep breath, and just do what I do. It’s so cool when you do a burnout and see all of these fans in the stands; it genuinely gives me chill bumps. It feels amazing being back in the winner’s circle like we’re used to.”

Hagan’s triumph at ‘thunder mountain’ was earned with a round-one victory over Chris King, an E2 Bye run, and an exciting side-by-side semifinal battle won against his fellow DSR HEMI-powered teammate Ron Capps to face No.2 qualifier Alexis DeJoria in the final round showdown. Hagan’s quick 0.046-second reaction time gave him the starting line advantage and he never looked back, powering his machine to victory in 4.105 seconds.

With this win, Hagan will have his first career opportunity to attempt to ‘sweep the Swing,’ winning the grueling trio of back-to-back races which visits Sonoma and Pomona, Calif. following Denver, but Hagan isn’t getting ahead of himself and is focused on the task at hand – taking it one round at a time.

"I’m not even thinking about ‘sweeping the Swing’ at this point,” said Hagan. “I just want to take it one race at a time, qualify well, and take it round by round. Fuel Funny Cars are so unpredictable, and that’s why this sport is so humbling. Every win light and every race win you’re grateful for, and we’re just going to keep moving forward."

Hagan’s wire-to-wire weekend enabled him to advance three positions in the Funny Car point standings, where he currently occupies third heading into Sonoma.