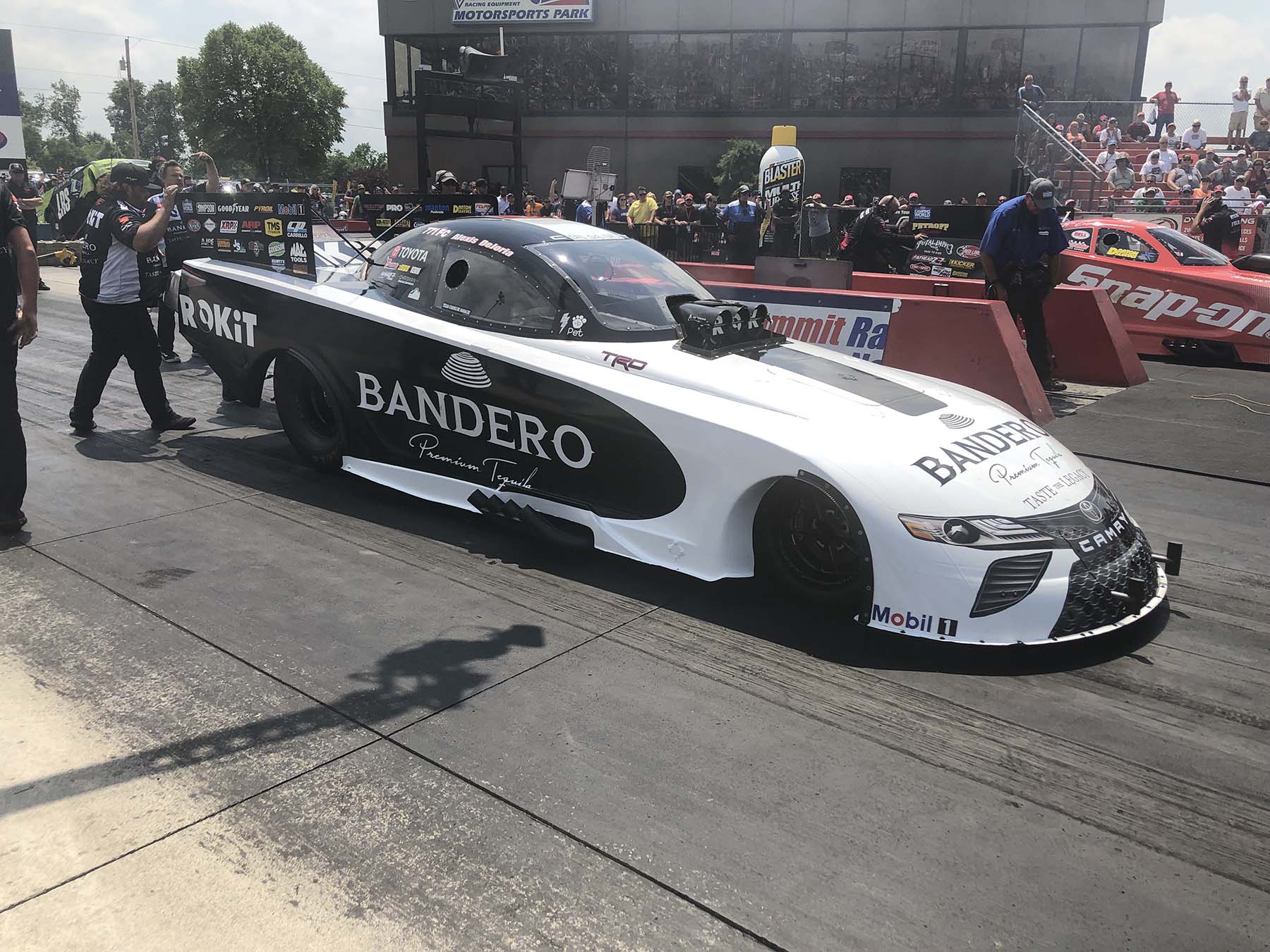 NORWALK, OH (June 27, 2021) --- For the second race in a row Alexis DeJoria raced her specially designed Bandero Premium Tequila Toyota Camry Funny Car and the packed house at Summit Equipment Motorsports Park was treated to strong performance numbers. After two days of qualifying and a couple of 3.9 second runs DeJoria started race day as the No. 6 qualifier. The past three appearances at the NHRA Norwalk Nationals DeJoria has raced to at least the quarterfinals and her first round race against veteran Paul Lee would be a tough test. Today she raced to her second semifinal of the 2021 season and first at the NHRA Norwalk Nationals.

DeJoria and her Del Worsham tuned Toyota Camry Funny Car did not take anything for granted to start race day. The Bandero Premium Tequila Funny Car that also represents ROKiT took the first round win with a 3.973 second run at 320.66 mph mirroring her final qualifying pass from Saturday. Both race cars were charging to the finish line but it was DeJoria who got their first and advanced to the quarterfinals.

In the second round facing the reigning Funny Car world champion Matt Hagan the Bandero Premium Tequila Funny Car team was unfazed and took out Hagan with a 3.952 second pass, the second quickest run of the session. DeJoria will have lane choice in the semifinals.

A massive rain storm blew across Summit Motorsports Park halting racing action for nearly three hours. When the teams returned to the track temperatures remained consistent but the air quality changed dramatically giving all the teams completely different racing conditions to deal with.

In the race of the day DeJoria and eventual winner Cruz Pedregon raced in one of the closest semifinals in recent memory. Both of the 11,000 horsepower nitro Funny Cars hit the finish line a mere 3.94 seconds after they took off. DeJoria proved she has one of the strongest race cars on the circuit running posting five 3.9 second runs including four in a row going back to the third qualifying session yesterday and today’s three elimination rounds. It was Pedregon advancing to the final round by a nose but DeJoria will head to the Western Swing with the confidence of a driver who has a race car that can go rounds every race.

“This weekend was interesting to say the least,” said DeJoria. “Conditions were all over the place, but we had five good runs and we were consistently in the ‘90s. We dropped cylinders the last two rounds. In the second round, we managed to get around Matt Hagan and in the semis, we just didn’t have enough. I didn’t see him the whole way down and I actually thought we’d won the round until we got to the top end. I’m proud of my Bandero Toyota guys, they’re doing a really good job. We’ve got two weeks off and I think we might do some testing. I’m just going to go home and keep practicing on my simulator. It’s one of those things. I’ve been doing this for about 15 years, but I’ve been out of the seat for two years. I just need to get back on the horse. I know I can do it. I know how to win and I’ve won before and I’ve got the team behind me.”

The Bandero Premium Tequila ROKiT Toyota Camry will be back on track in two weeks for the NHRA Mile-High Nationals in Denver. The team is sitting solidly in eighth place in the Camping World Funny Car point standings and is just outside the top five.