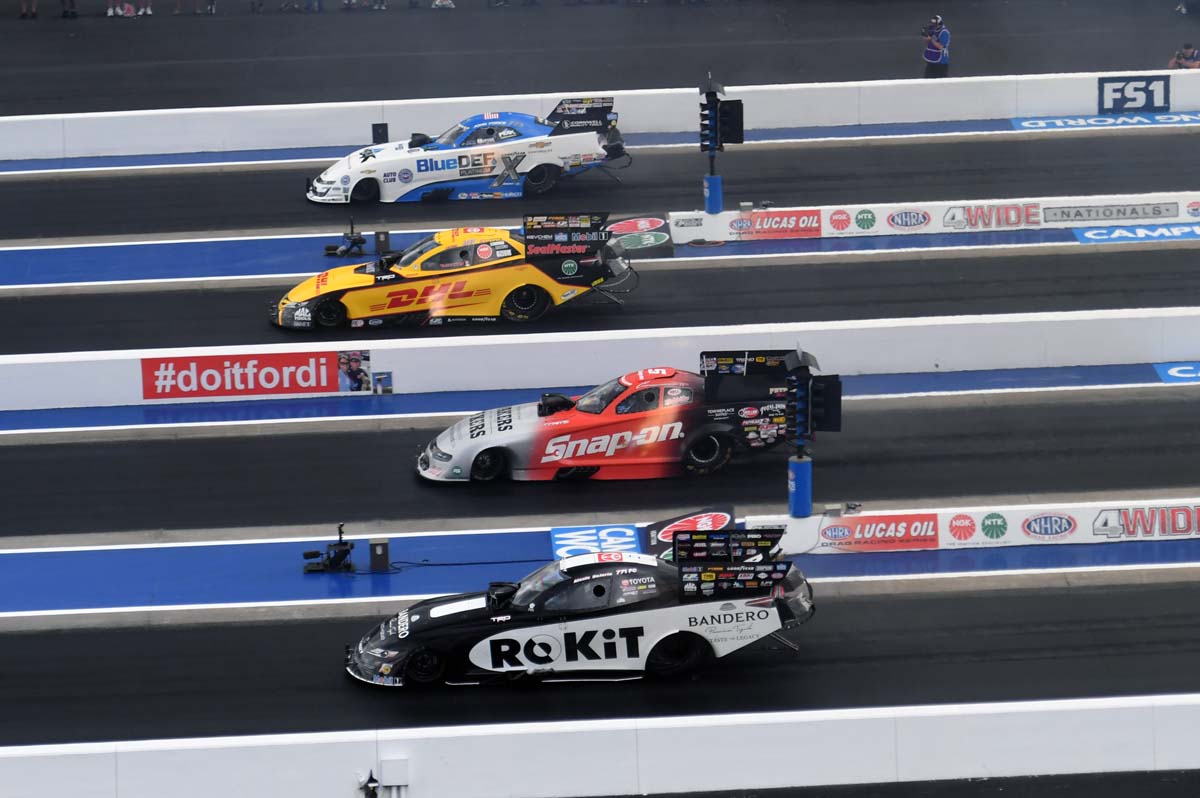 CHARLOTTE, NC (May 16, 2021) --- Three rounds of racing today showed that the ROKiT Bandero Premium Tequila Toyota Camry Funny Car and driver Alexis DeJoria will be a tough team to handle as the NHRA season ramps up. The 11th NGK NTK NHRA Four-Wide Nationals highlighted the strength of DeJoria’s race car and also showcased her skill behind the wheel.

“We had a very positive day today. What a turnaround from last race,” said DeJoria. “Our ROKiT/Bandero Toyota Camry was consistent. We qualified number two. We were the best of the opening round and won the first two quads. Any time you see a win light come on, it’s an ego booster. We were just on it today.”

The experienced driver made the most of two days of qualifying posting impressive times including the quickest run of Friday night that earned her three qualifying bonus points and the provisional No. 1 spot. On Saturday she was bumped back one position but entered race day as the No. 2 Funny Car on the property and a favorite to go rounds.

DeJoria and the ROKiT Bandero Tequila team did not disappoint as the blasted down the track in the first round winning their quad and lighting up the scoreboard with an impressive 3.903 second run. It was the second quickest run of the event and brought the near capacity crowd at zMAX Dragway to their feet.

In the second round quad DeJoria was matched up with a very tough trio of drivers including Bob Tasca III, Matt Hagan and Cruz Pedregon. Once again DeJoria showed an aggressive attitude jumping off the starting line just behind Hagan and then racing to victory posting the quickest run of her round. The win moved DeJoria into the first final quad of her career at the four-wide national events.

The final quad featured her Toyota teammate J.R. Todd, John Force and Pedregon. It was a line-up of heavy hitters and DeJoria held her own to close out her race day. DeJoria, Todd and Force left the starting line with nearly identical reaction times and all three Funny Cars were storming down their respective lanes. DeJoria’s race car was mixing up cylinders throughout the run and uncharacteristically slowed to 4.057 seconds, her second slowest elapsed time of the weekend.

“I honestly felt like it was going to be our day, but in the finals, unfortunately we dropped a cylinder at the step,” said DeJoria. ”Then more down track and that was it for the day. My reaction times are coming around. We’re just figuring things out and I know we’re going to win a race very soon. We’re going to stay and test here tomorrow at zMAX and get both cars on point. We’re going to bring the back-up car we ran in Atlanta out and make sure it’s all good. You never know when you’re going to need to pull that second car out and it needs to be just as good as the first one. In Houston, we need to do the same thing as we did here – good runs in qualifying and staying consistent.”

The success on the track moved DeJoria up to sixth in the Funny Car point standings and also moved her closer to the fifth and fourth place Funny Cars. The team will head to Houston Raceway Park for the NHRA SpringNationals set to kick-off Friday, May 21.