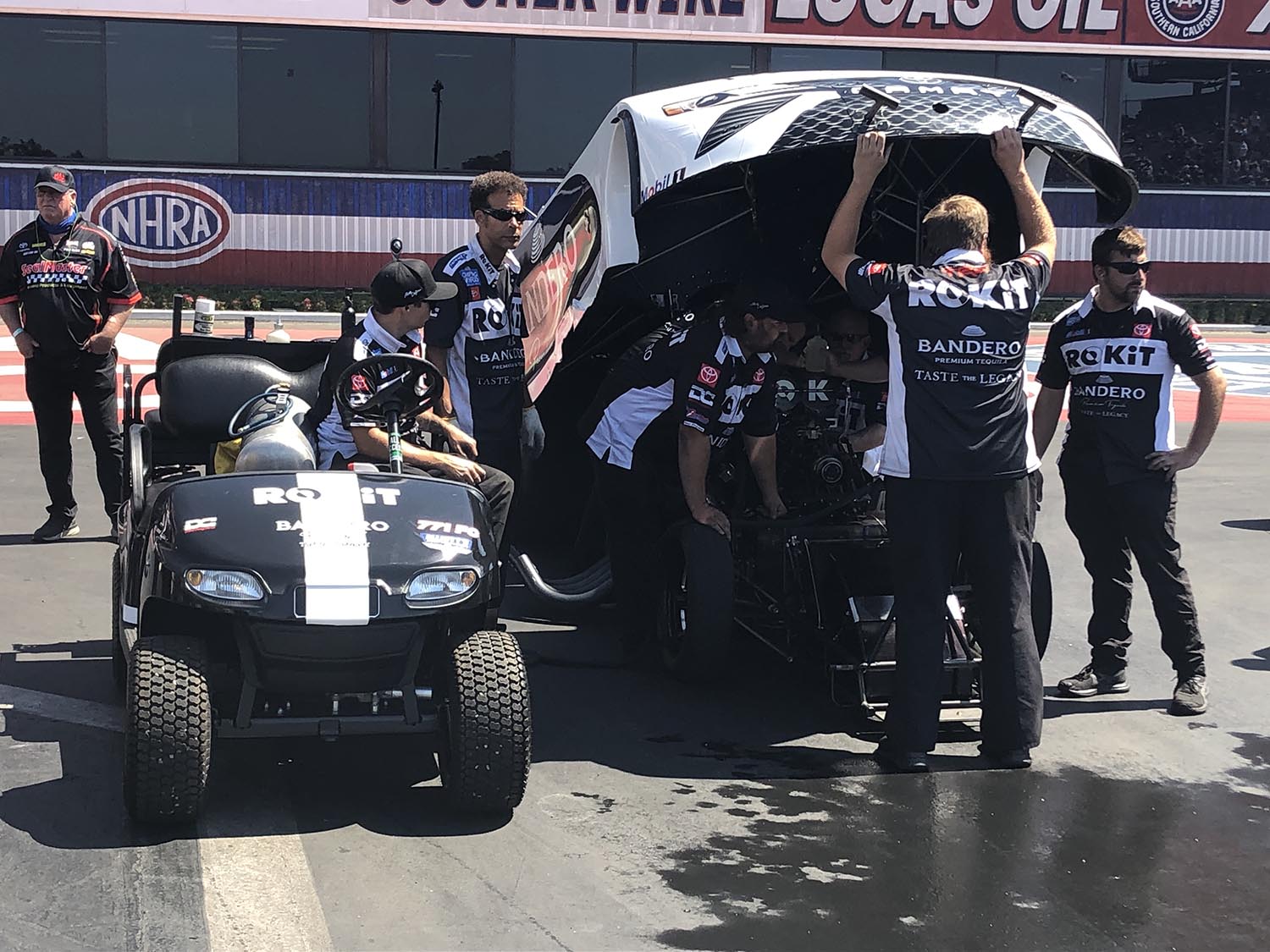 AUSTIN, TX (May 14, 2021) ---  The NHRA Carolina Four-Wide Nationals are Alexis DeJoria’s second shot this season driving the ROKiT Bandero Premium Tequila Toyota Camry Funny Car in one of drag racing’s most unique events. With over 40,000 horsepower on the starting line the round by round competitors almost equal an entire starting grid of most NASCAR races as soon as they hit the throttle pedal. That kind of raw power is what draws thousands of fans to zMAX Dragway and has led to a sellout crowd for Saturday’s final day of qualifying. It is also what fires up self-described adrenaline junkie DeJoria to suit up and strap in for a 320 mph ride throughout the season.

“There is nothing like sitting on the starting line with a Funny Car on either side of you,” said DeJoria. “When we are all doing burnouts before a run it is an amazing sound and you feel the ground move. Four nitro Funny Cars or Top Fuel dragster racing at the same time is one of the coolest things we get to do.”

Earlier this season at The Strip at Las Vegas Motor Speedway DeJoria qualified No. 3 and made a strong first round run. In the second quad a broken blower belt stole her chance to advance to the final quad and an opportunity to pick up her first four-wide nationals win. In 2014 at zMAX Dragway DeJoria raced in the final quad ultimately finishing third. The format of being first or second to the finish line has its advantages and disadvantages for the ultra-competitive racer who calls Austin, Texas home.

“The first couple of rounds of a four-wide race are wild because you just have to be either the first or second race car to the finish line to go to the next round,” said DeJoria. “If you smoke the tires you really have to take a chance about getting back on the throttle because someone else could be in trouble too. Getting off the starting line clean and building some momentum down track a lot of times is the key to victory at the four-wide.”

DeJoria’s ROKiT Bandero Premium Tequila Funny Car team is led by the only driver to have won in both Funny Car and Top Fuel at the zMAX Dragway Four-Wide Nationals, Del Worsham. The two-time world champion is recognized as one of the best drivers and tuners in the sport. Worsham, along with Nicky Bonifante, has set-up DeJoria’s Funny Car to be one of the quickest race cars on the property week in and week out.

“I can’t really put into words what Del and Nicky mean to our program,” said DeJoria. “They work so well together and the hours and hours they put into the race car to get it just right are impressive. Every time I strap in I know I have a race car that can go low or get a round win. As a driver that gives you a lot of confidence.”

This season DeJoria has qualified No. 2 and No. 3 at the events with two days of qualifying and has advanced to the second round in both events. Two weeks ago at the Southern Nationals an issue with the Funny Car body riding low on the chassis disrupted DeJoria’s staging process in the first round. The team evaluated and corrected the positioning. They are focused on putting the final race at Atlanta Dragway behind them.

“It was a frustrating turn of events for sure and we were able to go back and figure out what the issue was at the end of the race day,” explained DeJoria. “I am looking forward to getting to zMAX Dragway and making three great qualifying runs and then seeing three win lights on Sunday. We will be racing the next two weeks back-to-back and I am looking forward to getting into a solid racing groove.”

Qualifying for the 11th NHRA Carolina Four-Wide Nationals will begin Friday, May 14 and continues with two additional rounds on Saturday, May 15. Final eliminations will begin at noon on Sunday and will be broadcast on FS1.