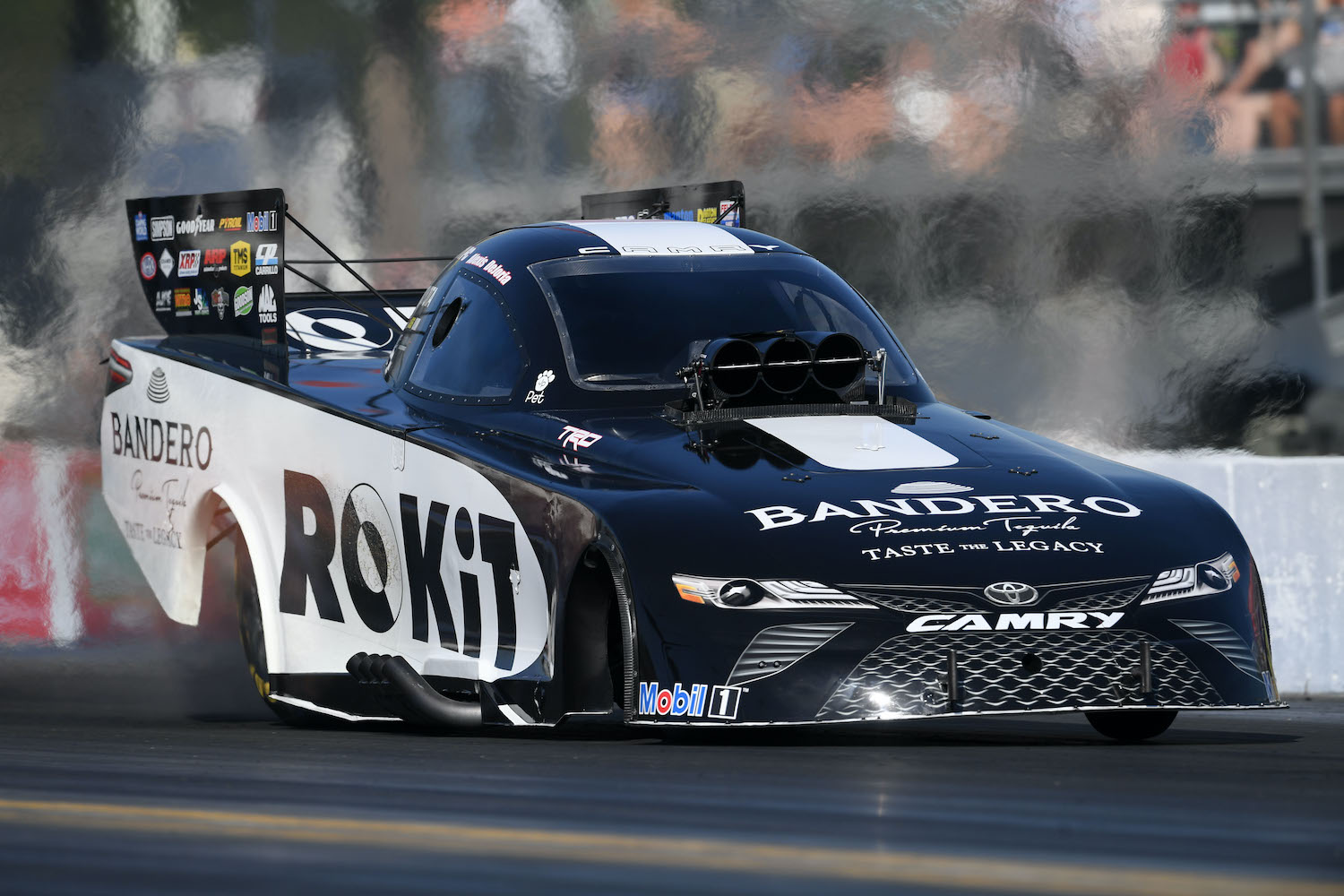 ATLANTA, GA (May 2, 2021) --- During the 2021 NHRA Camping World Drag Racing Series season a handful of national events will be contested with only two rounds of qualifying on Saturday prior to Sunday’s eliminations. The reduction in qualifying sessions adds pressure on all the teams and puts a premium on each team’s lone two qualifying runs.  The ROKiT Bandero Premium Tequila Toyota Camry Funny Car team and driver Alexis DeJoria were victims to the truncated qualifying sessions during the 40th NHRA Southern Nationals this weekend at Atlanta Dragway. The team was looking for performance consistency and opted to run their back-up race car which upon further inspection was the root of their qualifying and race day issues.

On Saturday in the first session DeJoria and her ROKiT Bandero Premium Tequila Toyota dropped a cylinder right off the starting line and had to click their runoff early. The tricky track had a number of teams aborting runs throughout the day. Coming back for the second session DeJoria and her team were prepared to move up the ladder from their provisional No. 12 spot. In the second session running beside Jim Campbell, DeJoria rolled in to stage and the staging bulb began to flicker. As DeJoria continued to attempt to stage she was timed out and did not get a second qualifying time. Her qualifying effort from the first session placed the ROKiT Bandero Premium Tequila Funny Car in the field as the No. 14 qualifier.

On race day matching up with No. 1 qualifier J.R. Todd, DeJoria suffered the same starting line issue and was timed out again. It was a very uncharacteristic result for the top shelf team and following the race DeJoria talked with Fox Sports reporter Bruno Massel at the top end.

“I am glad I had some time to take a few breaths because I am super-heated right now,” said DeJoria, a five-time Funny Car national event winner. “This is what happened to us in the second qualifying session yesterday. We just have to take it back to the pits and figure it out. We pulled the car from last year out to run this race to just see if we could get both cars dialed in and it has been giving us a little bit of a headache. This isn’t the way you want to lose the first round or any round really. You want to give yourself a fair chance. I am pretty upset that it was the last Southern Nationals and I was hoping to get a win here. (Crew chief) Del (Worsham) won his first race here his rookie year in Funny Car. It would have been nice to get another win for our team but we will move on to the next race.”

At the end of the day the team realized the carbon fiber body of the Toyota Camry sat lower on the back-up race car chassis and was interfering with the staging beams. The ROKiT Bandero Premium Tequila Toyota Camry team will be back on track for the Carolina Four-Wide Nationals at ZMax Dragway in Charlotte in two weeks.