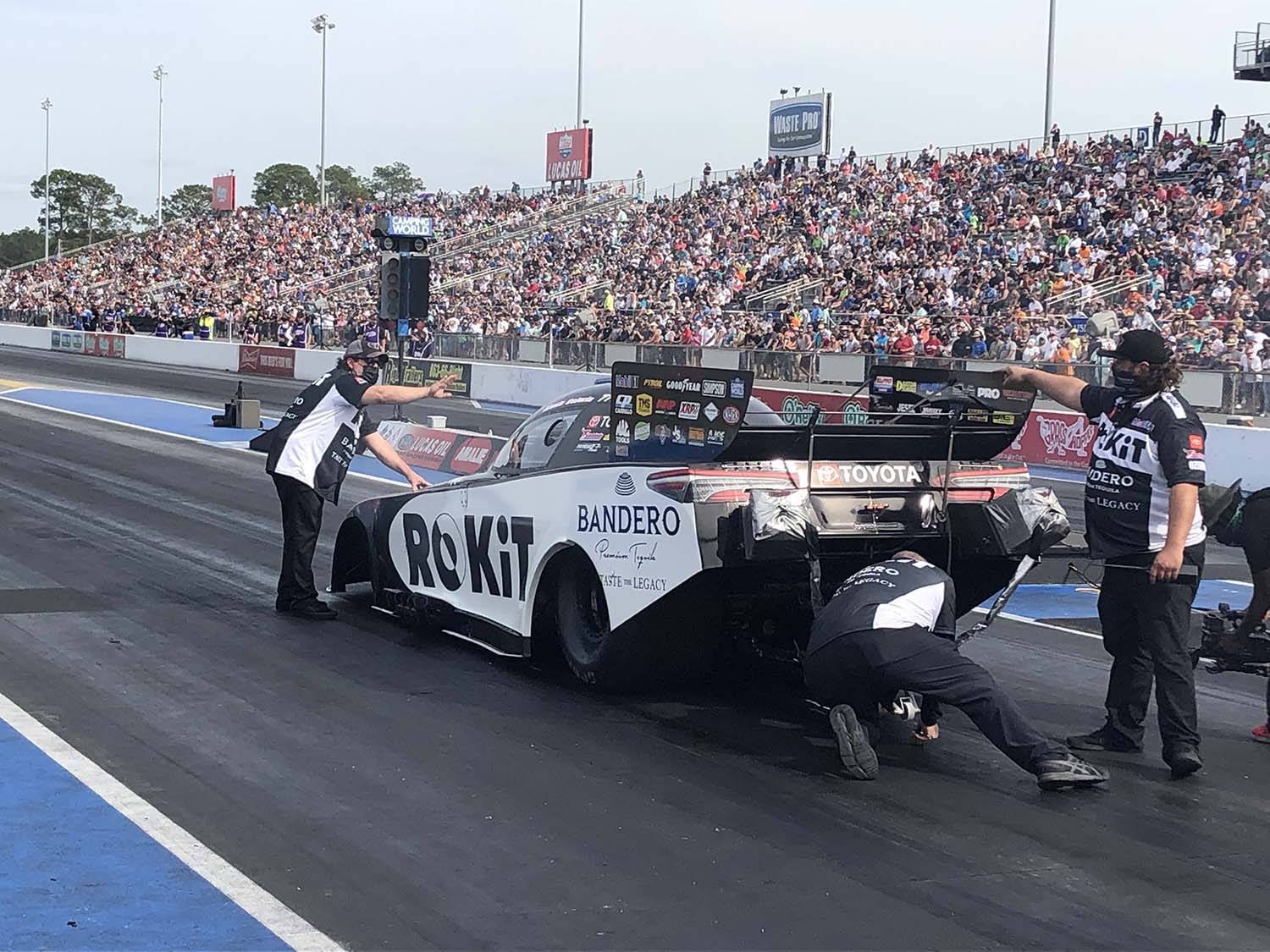 GAINESVILLE, FL (March 14, 2021) --- Starting the 2021 NHRA Camping World Drag Racing Series season at the 52nd annual NHRA Gatornationals for the first time did not phase Alexis DeJoria. The veteran driver powered her ROKiT Bandero Premium Tequila Toyota Camry to the No. 2 qualifying position and continued her qualifying dominance in the category. The last time DeJoria and her Toyota Camry Funny Car raced at the Gators they qualified No. 5 which began an active streak of six consecutive Top Five qualifying starts including this weekend’s strong performance.

“These crew guys are doing so well to start the season,” said DeJoria, who has five Funny Car national event wins to her credit. “(Co-crew chiefs) Nicky (Boninfante) and Del (Worsham) are tuning this Toyota up and it is making some killer runs. I am excited about going to the next race because we have a great race car. We have been a top five qualifier the past six races going back to last season. We got bonus points this weekend and were the No. 2 qualifier so that is a great start.”

In the opening round DeJoria matched up with John Smith and her ROKiT Funny Car team was not taking the Paul Smith tuned opponent lightly. She blasted off the starting line and lit the scoreboard 3.918 seconds later which was the second quickest run of the day. It was a dominant first round win for the ROKiT team. Following the run DeJoria’s crew chief Del Worsham had high praise for his driver.

“She kept it right in the groove. It was moving around at the top end,” said Worsham. “It is getting slick up there. Paul Smith is a tough customer and we knew we had to run well. For ROKiT, Bandero, Toyota, Fatheadz and all our other sponsors that was a good way to start the race. I am glad we got that round win and we’ll get back to work.”

At the beginning of the event DeJoria announced a new technical partnership alongside TRD (Toyota Racing Development), with ExxonMobil who expanded its current team roster within NHRA. ExxonMobil has enjoyed a partnership with Kalitta Motorsports and will also continue that winning relationship into the 2021 season. Under the expanded agreement, ExxonMobil will supply DeJoria and her team with its Drag Racing motor oil, along with other lubricants, while also providing engineering support throughout the season.

“Having Mobil 1 and TRD onboard is incredible because they bring the science and technology with what they do to help our team,” said DeJoria. “It is very beneficial to us. We also have some new sponsors like Bandero Tequila and Fatheadz, who outfitted our entire team with sunglasses. We have the whole crew from past year which is nice since all these guys work really hard and are a joy to work with. We all gel and this is going to be a good year.”

In the second round facing two-time world champion Cruz Pedregon DeJoria slowed from her first round elapsed time and she was ousted in the quarterfinals. The team was looking at the performance drop off culprit. It was an unfortunate turn of events during an otherwise successful weekend that will see DeJoria leave Florid No. 6 in the Camping World point standings and with momentum at the beginning of the season.

“We have a really fast hot rod with this ROKiT Toyota Camry Funny Car. In the second round we had a little issue which we are trying to figure out. It just fell off on performance at 200 feet. I am working on my reaction times, too. I am just going to keep working on it. My Toyota Funny Car is so consistent that gives me a lot of confidence. I have been racing long enough to know what to do and we will get everything working together,” added DeJoria.