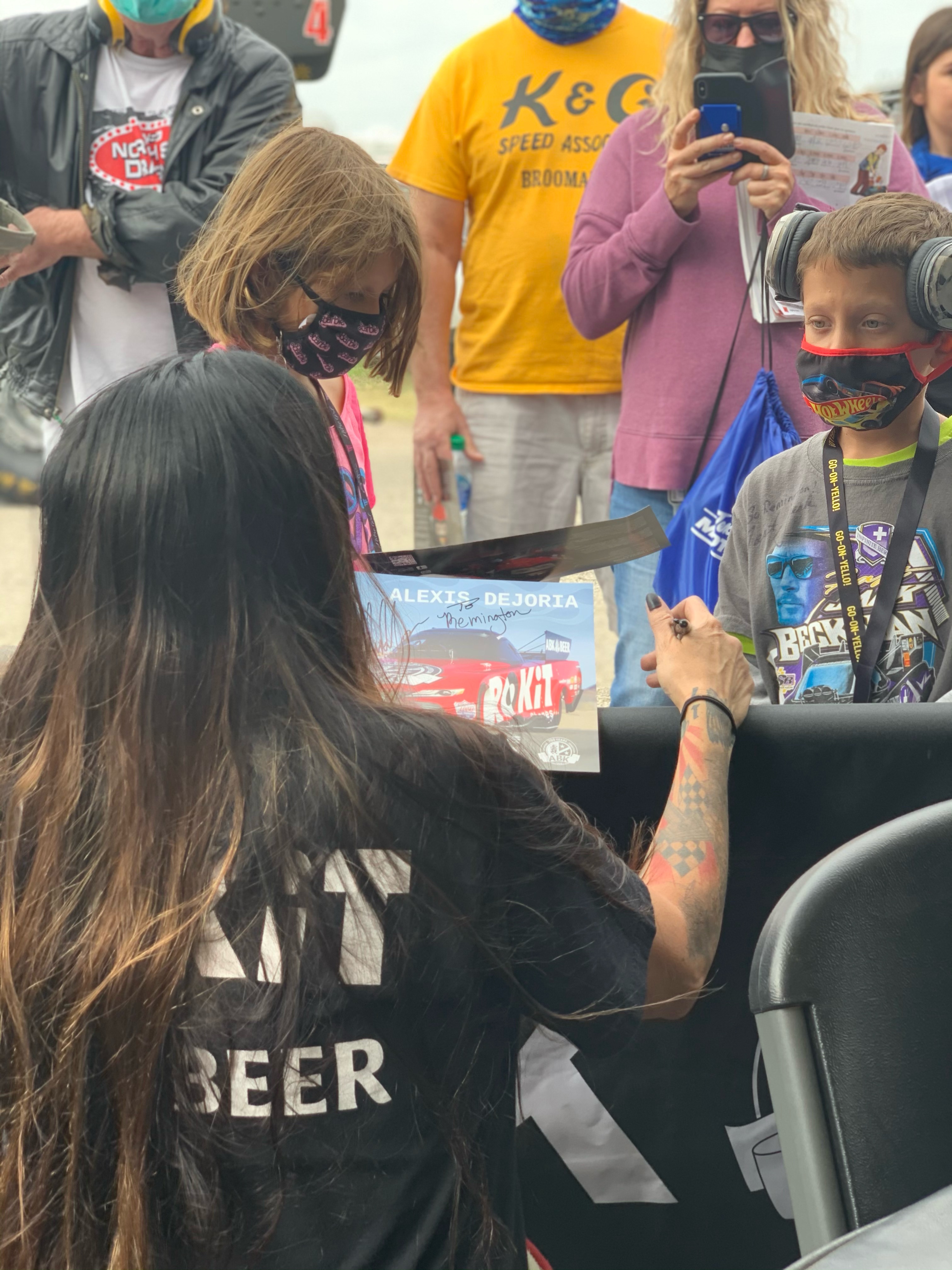 BAYTOWN, Texas (Houston) – When former U.S. Nationals Funny Car Champion Alexis DeJoria returned this season to the NHRA drag racing tour two years after announcing her retirement, her primary goal was to establish some street cred for the new DC Motorsports team she co-owns with one of her drag racing mentors, Del Worsham.

Having already accomplished that goal at the wheel of the red, black and boisterous ROKiT Phones/ABK Beer Toyota Camry tuned by Worsham and co-crew chief Nicky Boninfante, she has a new target in the crosshairs as the tour moves this week to Houston Raceway Park for the belated running of the 33rd Mopar Express Lane SpringNationals.

If steps taken this week by Worsham and Boninfante have mollified the mechanical demons that at the last two events put DeJoria on the highlight reel for all the wrong reasons, it’s reasonable to expect the five-time tour winner to contest the Funny Car championship in the next-to-last event in the current series.

Despite a supercharger explosion at St. Louis that blew apart the carbon fiber body and a catastrophic engine failure and fire that burned the car to the ground last week at Dallas, DeJoria has remained upbeat and amazingly resilient. Furthermore, the ROKiT Camry, for all its volatility, has shown that it can run competitively with the Dodges that currently dominate.

DeJoria started from the No. 2 qualifying position and reached the semifinals at St. Louis and, at Dallas, as the No. 5 starter, posted her quickest 1,000-foot time since returning to the tour at 3.895 seconds.

“I think we’re ready to win one of these bad boys,” she said.  “We’re running consistently quick ETs and the crew chiefs and I feel like we’ve found the setup.  We’re just having some gremlins, but we’ll work them out.”

The last time DeJoria hoisted one of the iconic Wally trophies awarded to NHRA national event winners was August of 2017 when she beat Tim Wilkerson, Cruz Pedregon, John Force and Tommy Johnson Jr. to win the Lucas Oil Nationals at Brainerd, Minn., in a Toyota she drove for seven seasons at Kalitta Motorsports. While her stint with Kalitta was rewarding, it was the challenge of competing as an owner/driver that brought the Austin resident back to the front lines of a sport that has been her passion since her dad, business entrepreneur John Paul DeJoria, took her to her first race at Pomona, Calif.

“I honestly knew deep down when I made the announcement that it was going to be sort of an open-ended retirement,” she said. “I’m beyond excited to be back out here. I have this incredible opportunity to build a team with two of the people who were by my side when I started my nitro Funny Car career.”

With only next week’s race at The Strip at Las Vegas Motor Speedway remaining on the 2020 schedule, DeJoria is just a couple of round wins away from realizing her goal of finishing in the Top 10 in points. She starts qualifying Saturday 63 points ahead of No. 9 Paul Lee.

Even before the pandemic shortened the campaign to 11 races, DeJoria and Worsham knew they would not be ready this season to contest the championship. Instead, it was about building a database from which the crew chiefs could tune and establishing a rhythm of operation through repetition.

“This season was about making more runs and getting more data and getting everyone ready for next year,” she said of a 2021 season in which she fully expects to contest the NHRA Camping World Championship.

As for this weekend’s race, she is motivated by Worsham’s past success at HRP. One of only three drivers to win NHRA series championships in both the Top Fuel (2011)and Funny Car (2015) classes, Worsham also is one of only three (with Mike Dunn and J.R. Todd) to have won in both fuel categories at the SpringNationals (Funny Car in 2001 and 2008 and Top Fuel in 2011).