DEJORIA AIMS TO CAPITALIZE ON PROGRESS 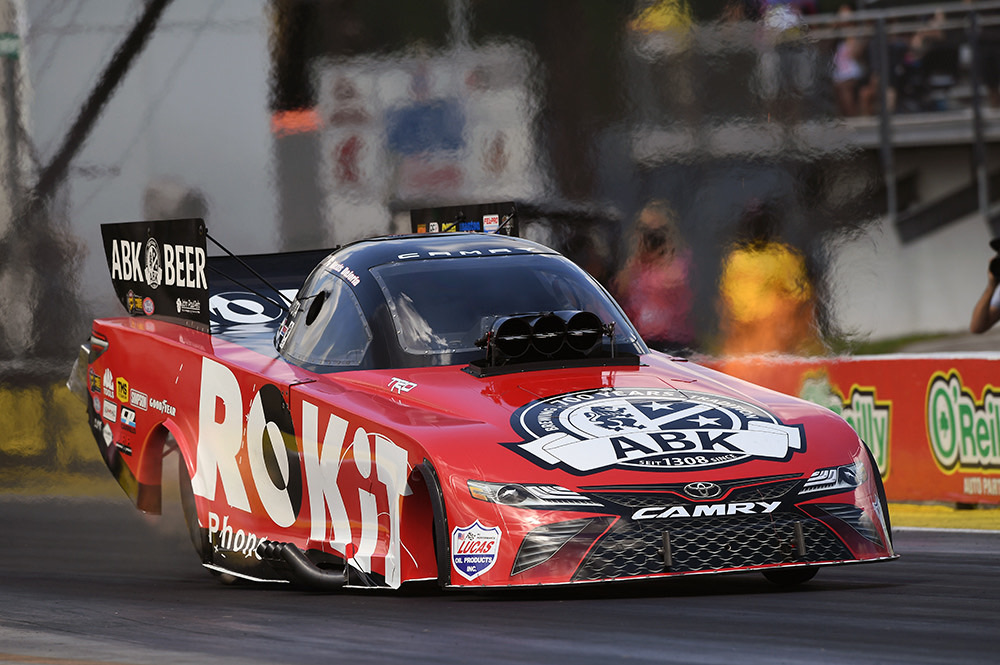 MADISON, Ill. (St. Louis) – Alexis DeJoria’s need for speed manifested itself long before she first climbed into the cockpit of the 330 mile per hour ROKiT Phones/ABK Beer Toyota Camry in which she will contest the Funny Car championship in this week’s 23rd Mopar Express Lane NHRA Midwest Nationals at World Wide Technology Raceway at Gateway.

While those around her were dreaming of careers in fashion, education, medicine and the movies, as a young girl she informed her parents that when she grew up, she wanted to become a jet fighter pilot.

Fascinated by combat aircraft after watching television documentaries on them, she could rattle off statistics on the capabilities and armament of fighter jets like the F-15C Eagle as if she had flown them for years. They were her obsession until her dad took her to her first drag race at Pomona, Calif.

Although she ultimately realized her childhood dream when she flew in an F-15E “Strike Eagle” operated by the “Thunderbolts” of the 389th fighter wing at Mountain Home AFB in Idaho, DeJoria’s passion for drag racing has been unquenchable since that first exposure and, after a two year absence, she is back at work in one of the fastest vehicles on the planet that doesn’t have wings.

With a new team born of old relationships, DeJoria is on a journey to become the first woman to win the NHRA Funny Car championship. This year was to have laid the foundation for that quest, but COVID-19 has made it far more difficult for DeJoria and the tuning tandem of Del Worsham and Nicky Boninfante to establish the competitive rhythm so crucial to success.

Only now, with four races remaining in a season shortened by the pandemic, do DeJoria’s co-crew chiefs believe their 11,000-horsepower hot rod is beginning to respond positively to their on-site adjustments. The proof, of course, will have to come on race day.

Although she has won five times on the Mello Yello tour and even though her resume includes a 2014 victory in the world’s most prestigious drag race, the Labor Day U.S. Nationals at Indianapolis, DeJoria hasn’t hoisted a trophy since she prevailed in the Lucas Oil Nationals at Brainerd, Minn., in August, 2017.

That said, this weekend she will be back on a racing surface on which she and her team legitimately expect to be competitive. After all, Worsham won the Midwest Nationals three times as a driver (2003, 2009 and 2015) and the last time DeJoria was here she posted career best 1,000-foot performance numbers of 3.863 seconds and 333.16 miles per hour.