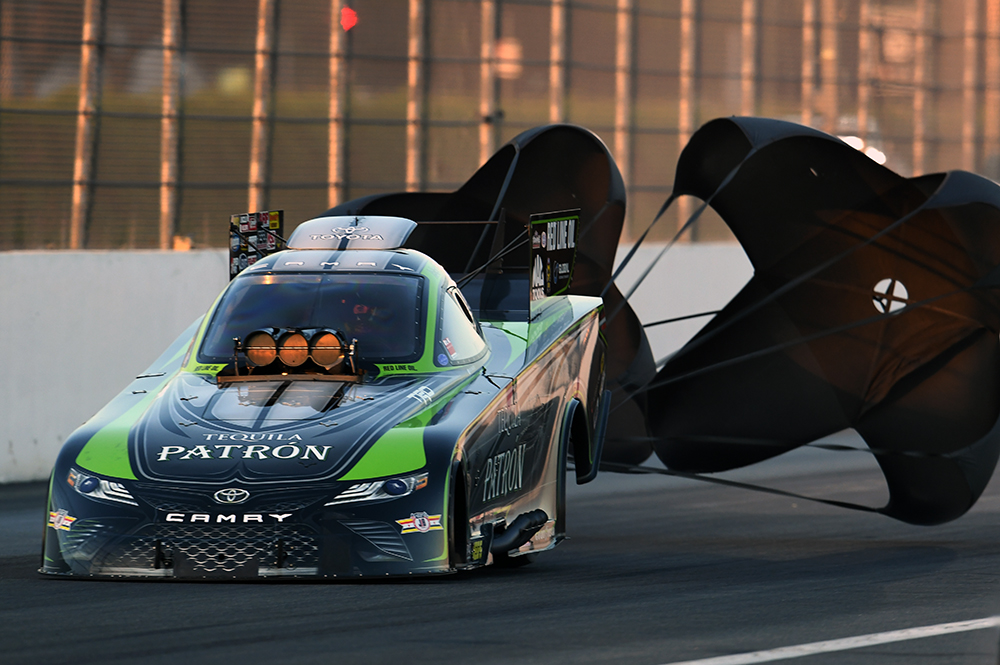 After qualifying fifth for the 141st event of her professional career, DeJoria faced Jim Campbell in the first round of eliminations. The five-time Funny Car winner had the advantage off of the starting line. She powered her Tequila Patrón Toyota Camry down the track in 3.932-seconds at 331.45-miles per hour, defeating Campbell’s tire smoking effort.

The Southern California native drew Tommy Johnson Jr. in the quarterfinal round. DeJoria made another strong run, but Johnson Jr.’s 3.911 E.T. edged out DeJoria’s 3.944-sec. at 327.90-mph pass, which would be recorded as the final run of DeJoria’s 12-year NHRA career.

“I could sit here and say it was a tough day and hard to go out with a loss, but honestly, we ran hella good throughout qualifying, ran well on race day, it just wasn’t our day to win that trophy,” said the 2014 U.S. Nationals Funny Car event champion.

DeJoria, who announced her retirement following the conclusion of the 2017 season last month, hands over the reins of her Nicky Boninfante-Tommy DeLago-led operation to Kalitta teammate, Shawn Langdon, beginning with the 2018 NHRA season.

“This is a top-notch team. Shawn’s going to be stepping into a really good car, and my guys are going to get a great driver. I’m glad the operation will continue with Global Electronic Technology on the side.”

As the feeling of finality sank in for the only driver to claim a win in each of the Funny Car, Top Alcohol Funny Car, and Super Comp categories, DeJoria expressed gratitude and appreciation for her time, and friends made, along the NHRA tour.

“I want to thank all of my sponsors for their support. Patrón, Toyota, Mac Tools, Red Line Oil, Justice Brothers, Global Electronic Technology, and most of all, the Kalitta family. I say ‘family’ because that’s what they truly are. Everybody connected to this family here has just been incredible and I’m going to miss them so much. My team, my crew chiefs, all those guys, they always give me a great car on race day.

“I’m going to miss racing against all of these guys and girls. When we’re on that line, it’s one thing, we’re out for blood, but behind the scenes, we’re family.

“Lastly, thank you to all of our incredible fans for coming out and supporting us through thick and thin for all of these years.”