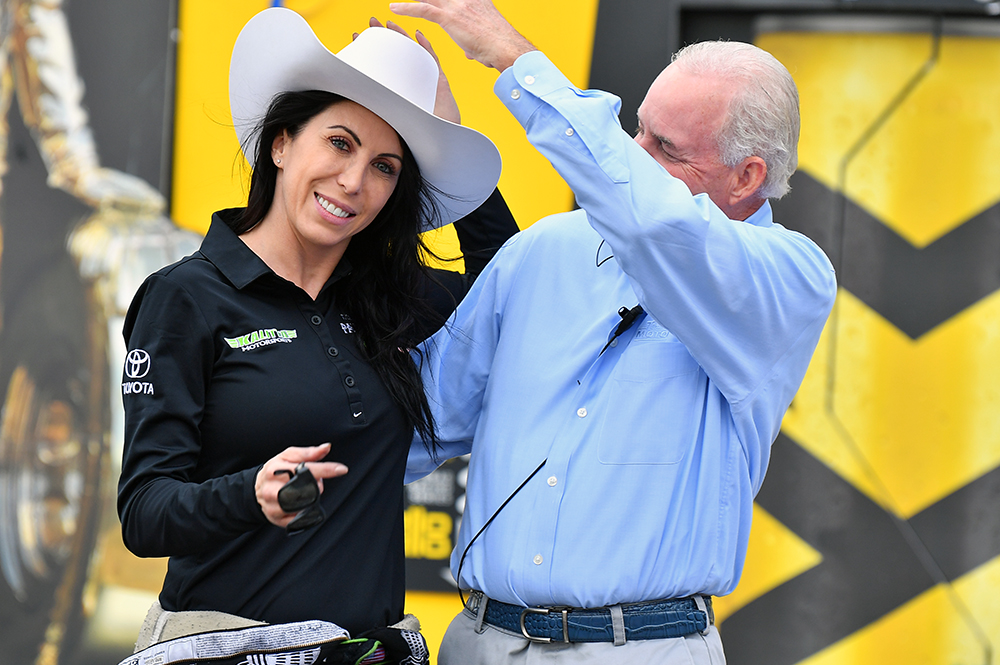 Race Recap:
Alexis DeJoria qualified ninth for her seventh running of the AAA Texas NHRA FallNationals, and faced Bob Tasca III in the first round of eliminations on Sunday morning. DeJoria made a solid run of 3.933-seconds at 329.83-mph in her ‘pinked out’ Breast Cancer Awareness Toyota Camry, and swiftly defeated Tasca’s 4.444 E.T.

Team Patrón lined up next to Robert Hight in the quarterfinals. Both cars put up good numbers, but a broken clutch lever caused the Patrón Camry to slow and cross the stripe in 3.945-secs, falling to Hight’s 3.855.

A win at the Texas Motorplex would have been the cherry on top of a momentous career for DeJoria, who recently announced her retirement. It was at the Ennis, Texas track where DeJoria licensed in a nitro Funny Car, made her professional debut, and met her husband. Despite not making it into the Texas Motorplex Winner’s Circle and earning one of the event’s coveted black cowboy hats, DeJoria did not leave the track empty handed. During Sunday’s pre-race ceremonies, she was presented with a custom white cowboy hat, honoring DeJoria for her NHRA career.

Quotables:
Alexis DeJoria, Driver
We broke a clutch lever second round against Robert Hight, unfortunately, and just got outran.

We’ve got two races left. I was really hoping to finish better here in Dallas. This track will always hold a special place in my heart. A lot of great memories here, and the Meyer family is just incredible. Billy Meyer actually gave me my own cowgirl hat with my name on it, so I ended up getting a cowgirl hat after all.

Overall, we’ve accumulated a lot of points for a team that didn’t make it into the Countdown. In fact, we’ve outscored about half of the Top 10 contenders right now, so that’s something to be proud about.